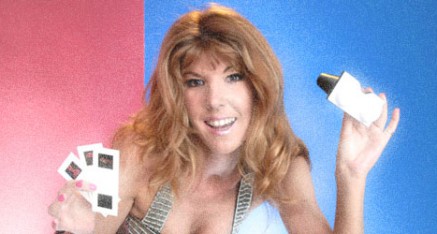 Our 3D Slides and Sets – Small and Larger Quantities

At that time I started to shoot a number of amateur models, many for the first time.  I would test anyone that walked into my studio in New York that was willing to pose in the nude for my 3D project.  Some were wonderful and we shot those a number of times and others were only there for the test shoot, so in most cases only one or two rolls of film were shot of them and only two slide strips were printed of each roll.  So our sets reflect the the amateurs that had posed in the nude for their very first time and those that wanted to come back and do more.  In some cases only 50 slides were shot and two prints were made.  You can find out more about our process and how Ron Raffaelli helped us get started.

More About Our Product and Manufacture

For the past 30+ years we have shot over 100 models in 3D.  In addition we hired centerfold photographers to shoot using our Realist cameras some rolls for us.  They did this at the same sessions they were shooting for the men’s magazines.  So we ended up covering their model fees and we ended up getting a nice selection of great models and professional images.

Our slides are all cut and hand mounted using a Seary commercial heat sealing machine and we use the pic-mount heat seal mounts.  Each slides “chips” are cut and placed on a light box.  Then positioned on the mount and sealed. This is a labor intensive process, but one that assures you of getting a Realist slide that is mounted and sealed properly.

There is a cost for models, for photography, processing, mounting and selling in the cost of each slide.  Please understand these are not mass produced and only two prints of each roll shot were produced using our special process.

All of our slides were shot on Kodak negative film stock.  Then sent to a motion picture film lab who processed the film and through and optical wet process contact printed the positive film on motion picture film stock.  So the same film projected in theaters on the big screen, made to withstand color fading and great heat from the projectors is the slides you now see.

You will notice our slides do not fade or lose their color. So what you are seeing in our scans is what you will receive and they will not fade as traditional slide film will.  This is why we are the top producers of this material.

Limited supply, loads of sexy models, great photography and of course custom mounting of our slides.

Some Typical Slides That We Recently Sold on eBay

This was the order from one buyer who bid on our slides.  Many of our slides sold for as much as $50 each in glass mounts.  Our Cardboard mounted slides have reached $60 that we saw that were resold by some of our past customers.  Our slides will only increase in value and are a great collectable.

Larger Views Of Some Of Our Models